I’ve heard it said that communication is 99% non-verbal, or something like that. When it came to greetings or the usual ‘chit-chat’ our’s lacked considerable verbiage. Here’s how it’d usually go:

END_OF_DOCUMENT_TOKEN_TO_BE_REPLACED 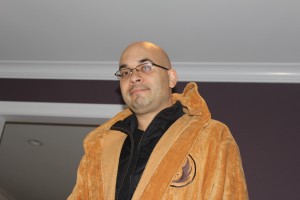 “The Force is strong with this one.”

–Darth Vader to himself, in Star Wars IV: A New Hope

I’ve always enjoyed Xmas (I know. Duh, who doesn’t – except you grinches out there.). Every year my wife and I debate about how best to setup the tree with the gifts: leave the gifts under the tree until Xmas, placing them there little by little over the course of the days leading up to Xmas, or leave it empty until the morning of Xmas day? I like the latter approach. I get a kick out of playing Santa, placing the gifts under the tree the night before while my kids are sleeping (and I like the cookies too :)). My brother preferred it that way too.

END_OF_DOCUMENT_TOKEN_TO_BE_REPLACED

–Uncle Ben to Peter Parker, in The Amazing Spider Man

I was browsing my brother’s blogs in the archives looking for a particular something he had posted (I’ll find it one of these days.). As usually happens in life, I came across some surprises instead. Among them I rediscovered a gem of an interview with my brother several years ago. I was proud to read it then and I’m proud to read it now.

I’d just like to comment on his first two responses. As is probably obvious by now, both my brother and my mother were (and remain) my role models (along with Spidey and friends ;)). So many folks are quick to point to their hardships growing up and let them define them. My brother chose not to. With that he positively influenced not one, but (at least) two lives instead.

I hope you enjoy the interview as much as I do. (Thanks Lori!)

“… to boldly go where no one has gone before.”

–Captain Jean-Luc Picard, in opening credits to Star Trek: The Next Generation

When I was a junior in high school, all my classmates were discussing their college ambitions and preparing their college applications. This one wanted to be a lawyer, that one a doctor, the other one an engineer, and on and on and on… Everyone was so excited, but me. I had no clue what I wanted to study, let alone what I wanted to be. But I knew I should go to college. After all, our teachers had always reinforced that. But they never said what we should do once we got there. I had transitioned from being an underachiever to an overachiever (that’s a whole other story) and was doing well in all my classes, even science (which I had always thought sucked.). The only subject I enjoyed on some level was math.

END_OF_DOCUMENT_TOKEN_TO_BE_REPLACED

“The supreme art of war is to subdue the enemy without fighting.”

–Sun Tzu, The Art of War

I’m hanging-out with my dog today: Bubbles Ñeñe Pagan. I never met a gentler dog; He wouldn’t hurt a fly, honestly. And he’s great with the kids. I love this dog, I really do. Every time I look at him, every time, I’m reminded about the day he became part of the family and how it almost didn’t happen.